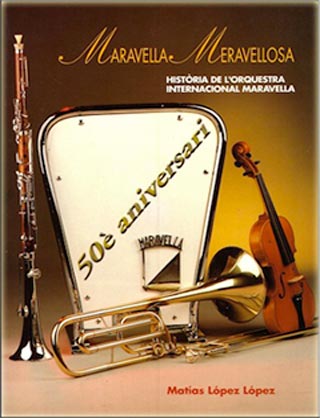 ORCHESTRA INTERNATIONAL MARAVELLA: already more than 60 years !!!
"Without the passion with which the Maravella Orchestra has carried out its artistic work since 1951, and without the excellence and absolute professionalism of its musical concepts, the work" Maravella, Meravellosa. "History of the Maravella International Orchestra (Girona , Palahí, 19931/20012) would have been simply impossible.The Maravella entrusts a kind of poison - a philosophy, a puresa - that never leaves indifferent.This has been so in all its epochs: in the growth, in the international consolidation , In the difficult current time in which it must be remarked that the place that occupies our orchestra in the popular consideration and in the musical historiography neither has not been a gift nor is maintained by chance the book that tells the life of the International Orchestra Maravella Is a patient and meticulous journey in which the reader is invited to understand how a paradigm is born and how it is constructed, a model for the coblas-orchestras of all time. "

Matías López López (Lleida, 1960) graduated in Classical Philology in 1986 at the University of Barcelona. Since 1982, university professor: Professor Titular from 1987 to 2010; Since 2010, Professor of Latin Philology at the University of Lleida. He has taught specialized in European and American universities, and is the author of numerous publications (books and articles) in the field of language and, above all, the literature of ancient Rome. He has been Vice-President of the Catalan Section of the Spanish Society of Classical Studies. Vocational musician but committed, he completed his studies of Professional Degree in the Conservatory of Lleida under the mastery of Josep Quer - former member of the Maravella Orchestra - in the trombone specialty. He is also the author of several studies of musical historiography and criticism, both in the classical field and in the most popular genres or, in a general sense, modern (including jazz, rock, orchestral music, crooners and song of author). He has collaborated and collaborates as trombonist with diverse formations (mainly, symphonic bands and big bands).