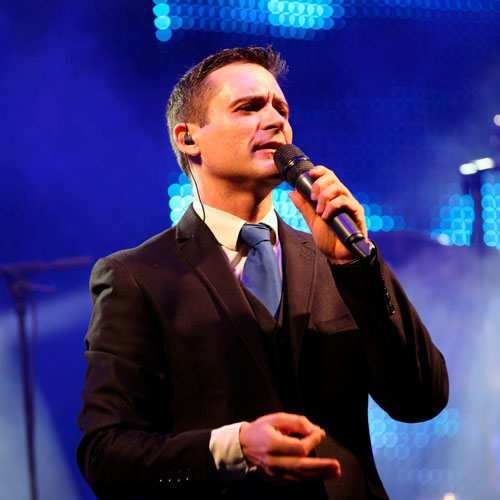 He was born in Vilanova i la Geltrú (Barcelona) where he actually lives with his family although he says: “ I like to say that I am an “exiled ribeta” since I lived all my life in Sant Pere de Ribes”.

His musical formation begins with the study of piano, even classical as modern. “Since I was 17 I have been a member of some musical formation” but his interpretative versatility and the anxiousness of improving, made a turn onto what he loves the most: singuing!.
He feels lucky to see that singuin his way of living. “Since I was a kid, I always dreamed of being a member of a band, on stage and surrounded by great musicians”.

He has several musical influencers, he can enjoy an Aria from any opera, as he can vibrate with the actual Pop music although he recognizes that his favorites styles are Salsa and Funky.

During his free time he loves to spend time with his wife and kids: “I love to do a good round trip around our territory and at the same time, if it is possible, not to lose the opportunity of enjoying a good orquestra and live up close to our festivities and our popular and traditional culture”.

As a curiosity, he says; “ Because of my parents passion for dancing, usually, I saw many orquestras, and I can perfectly remember the day that music captivated me forever...It was at La Nau Pere Valls i Soler Theater while listening the magnificent West Side Story with the International Orquestra Maravella".